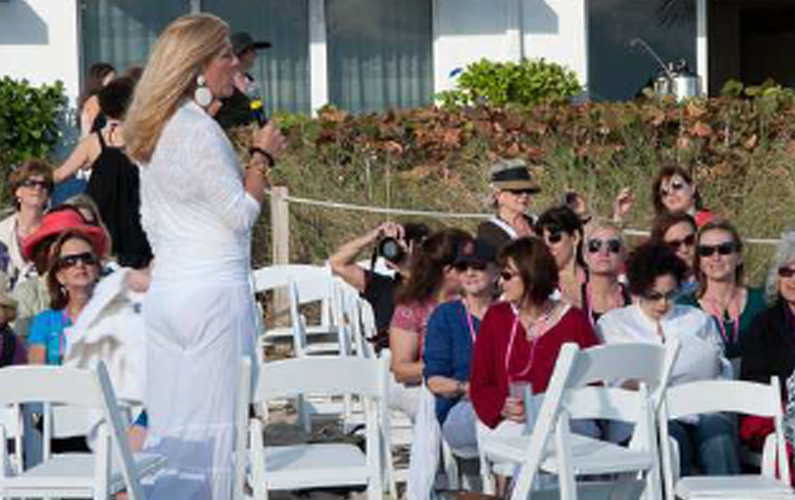 ON the site of a 17th-century monastery in Cartagena, Colombia, a sort of Illuminati of the business and political worlds  gathered in February for their annual winter rites.

Drawn from government, banking, technology and beyond, its members form a rare  — and global — power elite. Each has been tapped, in Skull and Bones fashion, by an existing member. Each searches out and grooms new talent —  people who can add to this group’s
considerable wealth, knowledge and power.

But men need not apply: this exclusive club is women-only.

It is called Belizean Grove, and if you haven’t heard of it, you’re not alone. Founded 12 years ago, it operates mostly under the radar. The first time it received any real public attention was in 2009, when it became known that Sonia Sotomayor, now a Supreme Court justice, was among its 125 or so members. (She has since quit.)

Despite its low profile, Belizean Grove is fast becoming what could be considered the world’s ultimate old girls’ club. Perhaps that’s no surprise, as it is modeled on one of the nation’s most exclusive old boys’ clubs, Bohemian Grove. That hush-hush group, an extension of the 139-year-old Bohemian Club in San Francisco, has counted so many rich and powerful men among its ranks — including the presidents Eisenhower, Carter, Nixon and both Bushes — that it sounds like something out of a Dan Brown novel. Indeed, in 1942, the men of Bohemian Grove, who meet each summer under a canopy of redwoods in Monte Rio, Calif., dreamed up the Manhattan Project.

Some members of Belizean Grove are working on a mission of their own: the White House Project. Its goal is to have a woman elected president.

“Grovers,” as the members are known, tend to be in their 50s and 60s, and though most are not household names, they represent a rare confluence of wealth and influence. They serve as directors of companies including Xerox, Procter & Gamble, NYSE Euronext, Nasdaq, Nordstrom, DSW, PetSmart and REI. Some previously held high-level positions at blue-chip companies but then left to form their own businesses.

Members also include a Canadian senator and the chief operating officer of the Episcopal Church. Many are Americans, but others are from countries including Colombia, Ecuador, Iceland and New Zealand.

Grovers have capitalized on their network by cutting deals, making multimillion-dollar investments and hiring and mentoring up-and-coming businesswomen. Along the way, the group has become a model for a growing number of women’s business networks.

Members say they have worked and invested together and helped one another join corporate boards, but they are hesitant to reveal details of specific deals. Above all, Grovers protect one another’s privacy.

FOR four days, members convene at a site, generally somewhere in Central or South America, and stretch out on a beach, drink some wine and talk. Conversation flows freely, from topics like leveraged buyouts and international diplomacy to the problems of simultaneously managing the care of children and elderly parents.

Catherine Allen, a Grove member who is C.E.O. of the Santa Fe Group, a strategic consulting firm, puts it this way: “We leave our egos and business cards at the door. It’s about: ‘I have this problem. I’m a C.E.O. of a corporation, what should I do?’ and this becomes a sounding board because there are other women who have been in similar situations.” She adds: “It’s about learning from each other, enriching our minds, developing true friendships. There’s a real generosity of spirit.”

The group emerged informally and without an agenda. The Grovers originally gathered because they otherwise had few outlets for their concerns as they climbed the corporate ladder. But their meetings have led to a continuing dialogue about business, with members gaining access to capital and connections outside their established circles.

“Women in tech, media and finance have invested together,” says Ms. Allen, who has embarked on a secondary consulting business with three other Grovers. “Many sit on the same venture boards. Many got there because of other women who also sit on those boards.”

The group’s membership process remains confidential. But it is known that one or more members select a candidate and shepherd her through meetings with a membership committee. New members have “big sisters” who make introductions at meetings and retreats. To avoid competition or discomfort, only one employee of any company can join.

“We try to help each other achieve our destinies,” says Susan Stautberg, Belizean Grove’s founder and president of PartnerCom, which manages advisory boards and conducts searches for C.E.O.’s. “We help each other in jobs, mentor each other’s kids and help each other start new businesses.” Ms. Stautberg is also a co-founder of WomenCorporateDirectors, which comprises 850 women who serve on more than 1,000 corporate boards worldwide.

WomenCorporateDirectors is a talent bank for businesswomen, and Ms. Stautberg helps many high-ranking women build their sphere of influence, but it takes more than a C-suite title to be considered for Belizean Grove. “Everyone has a phenomenal résumé to get into the Grove,” she says. “But it’s an organization about heart, soul and spirit.”

Some might say the concept of Belizean Grove smacks of elitism. But Grovers would counter that they come from every religion, race, socioeconomic background and political party — and that in order to build a trusted community, they need to relate to one another. They say that Grovers wrestle with issues that the average woman might never confront, and that the group’s advice and support is valuable precisely because its members have had similar experiences.

At Belizean retreats, which are held in January or February, Grovers introduce themselves at an opening dinner and are encouraged to mix with participants they don’t know. Two-thirds of the attendees will have roommates. Occasionally, women who have never met will bunk together because Ms. Stautberg thinks they will get along.

They spend mornings in panel discussions based on the retreat’s particular theme; in recent years, those themes have included “Complexity,” “Shaping Our Future” and “Wisdom and Spirit.” At the sessions, Grovers showcase their areas of expertise, opining on issues as diverse as military strategy, marine life, philanthropy and how revolutions in the Middle East may affect the geopolitical balance.
At lunchtime, women break into moderated discussion groups on topics like climate change, managing finances in times of crisis, dream interpretation and “Should I get a facelift?” Afternoons are reserved for free time. In the evenings, the women might attend a reception at the United States embassy with the host country’s leading politicians and dignitaries.

“I don’t have much time in my life to hang around and talk without a purpose, but here everyone shares,” says Davia Temin, a Grover who is chief executive of Temin & Company, which specializes in crisis and reputation management. “You get to really know each other and develop 360-degree relationships.”

“I prefer to do business with people whose morals and ethics I trust,” she says. “You always know Grovers are going to be good, solid people.”

She adds: “Many of us had to shoehorn our way into a completely male world, so there’s one level of network that provides solace and comfort.” After all, many Grovers have forged ahead despite sexism and discrimination. “But now we’re taking it to the next level, which is actually to create value in the world.”

As Grovers look ahead, many believe the best way to aid subsequent generations of women is to back female entrepreneurs.

Grovers are not alone in sponsoring up-and-comers, but they have a head start. Five years ago, Belizean Grove formed a group called Today’s Already Rising Achievers, or TARA, for women in their 30s and 40s. The TARAs, with a membership of about 45, are invited to join Grovers for the last two days of their retreats and to participate in less formal events throughout the year.

“Leaders give back,” Ms. Stautberg says. “We don’t want to become irrelevant, so we’re thinking about the next generation. We mentor, help raise money for their companies, and get them speaking engagements. But it’s a two-way street with the TARAs. They help us with technology, keep our thinking current, and are in positions to hire our kids.”

At 27, Alexa von Tobel is too young to be a TARA, but she is still a magnet for women’s support. After dropping out of Harvard Business School in 2009 to start LearnVest, a personal finance Web site for women, she received seed funding from three founding members of the Circle Financial Group: Ann Kaplan, a Grover who is a former Goldman partner and a current director of Goldman Sachs Bank USA; Jacki Zehner, a former Goldman partner; and Maria Chrin, a former

Goldman vice president. Then they spun their Rolodexes to help rally additional backers. Amid a flurry of offers for financing from venture capital firms, Ms. von Tobel chose to work with Theresia Gouw Ranzetta, the only female partner in the United States at Accel Partners, a venture capital firm based in Silicon Valley that invests in start-ups across a range of industries. Accel invested $4.5 million in LearnVest.

Ms. Kaplan has held weekend strategy sessions in her home for the LearnVest team, as well as cocktail parties to introduce investors and interested parties to Ms. von Tobel. Ms. Zehner introduced Ms. von Tobel to Janet Riccio, an executive vice president at the Omnicom Group, who became a formal adviser to help build LearnVest’s brand.

Now Ms. von Tobel is extending a hand to her peers. Last October, more than 100 women in the technology and start-up worlds of New York met for “Lady Business,” a party hosted by Ms. von Tobel as well as Alexa Hirschfeld, a co-founder of Paperless Post, a purveyor of stationery via e-mail, and three other entrepreneurial women.

While Ms. Kaplan has been Ms. von Tobel’s primary sponsor, other Grovers are also working to put her on the map. This fall, Ms. Temin gave a presentation on women and money at the Harvard Women’s Leadership Board conference and told a room full of female luminaries about WHILE some businesswomen celebrate women-only networks as their own “golf game,” others bristle at the idea that gender should inform business alliances. Many senior women say supportive male bosses and mentors have been instrumental in their rise. And because men still hold the keys to power — 97 percent of Fortune 500 C.E.O. positions and 84 percent of corporate board memberships, to be exact — some businesswomen are wary of networking in isolation.

“The most successful women I know are not focused on who has what chromosomes,” says Karen White, a former senior executive at Oracle who is now a technology investor and executive chairman of Syncplicity, a company that uses cloud computing for file management. “Investing my time in developing a gender-specific business network doesn’t make sense. There is an incredibly vibrant network in my industry and that’s the playing field I want to be on.” Sometimes, the emphasis on women-only networks can seem overwhelming, even to people who back its ultimate aims. “This fall I had seven huge women’s events in seven weeks,” Ms. Temin says. “At the end I felt like somebody should give me a shot of testosterone. I asked my husband to talk to me about basketball.”

But Ms. von Tobel is grateful for the influence of the Grovers and their brand of networking.
“I’m from a tiny town in Florida,” she says. “No one in my family went to Harvard, and it’s not like I fell off a truck with $1 million in my pocket. I’ve worked incredibly hard and I’ve watched women bend over backwards to open doors for me. This was all about people who are connected to other people.”