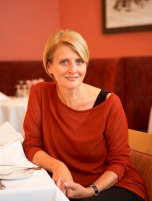 Dorothy Cann Hamilton was a member of the Belizean Grove for just a few short years, but she made a big impact on the group, as befits someone with a big personality and an even bigger heart. More exhilarating, though, was the impact the Grove had on Dorothy.

Dorothy loved the camaraderie of the Grove – the “go deep fast” of it. And nobody could go deeper or faster. And I guarantee that nobody had more fun than Dorothy. Add to that her extraordinary achievements (Legion d’Honneur, for heaven’s sake!) and Dorothy was the perfect Belizean Grover. The Grove rounded out Dorothy’s already too-full life with the fellowship and fun that she craved.

I proposed Dorothy for membership in the Grove about five years ago, partly because I knew it was a spectacular match, and partly to bring in someone else who was in the hospitality field; I needed reinforcements!

Lucky for us, Dorothy proposed someone else in our field who also took to the Grove like a duck to water: Helen Murphy.

When we learned of her death (in a car accident in Canada last year) we were stunned and saddened.

Helen and I share our reactions to the tragic news:

Helen: Dorothy was a very close friend and a wonderful, devoted mother to her daughter Olivia. She was an amazing person and an exceptional businesswoman. As a woman and a friend she lived life fully and she always helped people in need which many people do not know.

She has touched my life in so many ways as a friend and colleague. It is a sad and painful time for my husband and children who knew her well. She taught my children how to cook and how to enjoy food by getting them to have fun in her kitchens and in her homes. By her side, I walked with her through some of her greatest struggles and then watched her rise up against formidable challenges.

Years later, she helped me through fires and forced me to get stronger with her gentle but strong words. At the same time, she called on me to help others who were in need and we did – all over the world. She never sought credit.  Dorothy’s only desire was that help was given. She was fierce in her pursuits.

She tried for a long time to get me to join the Grove and I didn’t understand why. Now I know why – she wanted to give me a gift. Well, she gave me one of the greatest gifts of my life – more time with her, more opportunities to intersect in life and an opportunity to meet other like-minded wonderful women.

I spent a lot of time with her this past year.  We had great times and laughed often. In my last exchange with her we talked about having fun. I am sure she is rocking it already with her friends in heaven and she would expect us to celebrate her life in the coming years.

Jenifer: As a mover and shaker in the food world, Dorothy had a widely-admired public presence (see the glowing obituaries in national and international publications), but it is the offline Dorothy that I found most compelling.

She loved to have fun, as befits someone who knows and takes pleasure in good food and wine. But she was positively not a snob, which was endearing. Nor was she was ever intimidated or threatened by people or situations.

Dorothy was daring (remind me to tell you the story of Dorothy in Havana with a group of Grovers – it was after midnight and involves a voodoo priest). Did you know she was a surfer as a teenager, in BROOKLYN?! She went to college in England – on her own. She traveled halfway across the world to join the Peace Corps.

Dorothy defied convention, in all the ways that made her an extraordinary human being.

The mixture of these traits made for a nuanced and perfectly balanced personality. She was magnetic and seductive: If we are all still in high school then everyone wants to sit next to Dorothy at lunch. But for the right reasons: I only ever saw Dorothy in generous mode.

My favorite time with Dorothy was the summer of 2015, when I visited her in Milan during the Expo. Her accomplishment there has become legendary; without Dorothy the USA Pavilion would not only have never come to fruition but also not have been the huge success that it was. And yet her support of others on the team was selfless.

By the time I got to Italy, Dorothy had had an extraordinarily stressful few months, so the two of us set off for a three-day excursion to the Lake Country, ending in a ferry ride to our hotel in Bellagio. We walked, and talked, and drank wine nonstop, basking in the Italian summer sun. She was restored, and, as always when I left her I felt as if I hadn’t had enough of Dorothy. Our giggling refrain upon parting was “We’ll always have Bellagio!” But we won’t – once again she has left me wanting more of Dorothy.