The St. Louis committee (Laura Herring, Lauren Herring, Sharon Fiehler, and Susan Block) is already hard at work planning the event! They have already started working on their program and the exciting events they have in store for us all.

Once regarded as a forgettable city in “flyover country” – St. Louis has been selected as one of WSJ’s 10 best travel destinations for 2019.

St. Louis is more than just a Gateway to the West. Known for its famous arch, St. Louis is a lively destination in its own right; full of inviting neighborhoods, stunning parks, such as the Missouri Botanical Garden, varied night life, and restaurants that draw on the bounty of surrounding farmland and rivers. With a mix of Midwestern sensibility and southern charm, St. Louis is a city looking to the future. 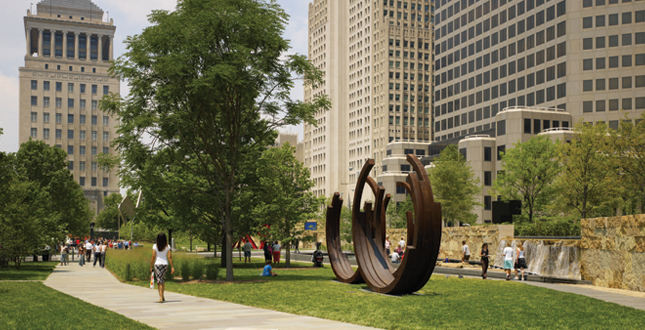 Register for the Retreat

Here’s a look at some of the fascinating panels:

Also, we are also thrilled to announce we will be having a keynote address by Jackie Joyner-Kersee on Thursday evening at the historic St. Louis Arch.

Jackie Joyner-Kersee is an American retired track and field athlete, ranked among the all-time greatest athletes in the heptathlon as well as long jump. She won three gold, one silver, and two bronze Olympic medals, in those two events at four different Olympic Games. We have a few members who are currently on our wait list for rooms at the Hilton St. Louis Ballpark – including new members who have just joined the Grove!

We also have a group of members who have booked rooms at the Drury Plaza Hotel St. Louis at the Arch, located across the street from the Hilton (where our conference will be held). While we do not have a room block at the Drury, if you still need a room and would like to join this group, the link to book is here.

Click here to register for any of the below tours.
The registration deadline is Wednesday, August 28.

“The city, with its once-quiet, now-vibrant downtown, offers new restaurants, microbreweries and a rich array of cultural venues, including a museum that pays tribute to the blues.”

“The 630-foot Gateway Arch, the grand 1965 city landmark, remains the same, including the vintage tram rides to the top (tram ride from $12). But a four-year, $380-million remodeling of Gateway Arch National Park (admission $3) reframes the monument’s connection to the city and to the westward migration it commemorates.”

“St. Louis is the original home of the ubiquitous macro-brew Budweiser. But microbrew operations, some employing veterans of Bud, have created competing pints at newer brewers like Side Project Brewing, Narrow Gauge Brewing Company and Urban Chestnut Brewing Company. If forced to pick one, don’t miss the original upstart, the Saint Louis Brewery, makers of Schlafly beer.”

“In the Botanical Heights District, named for its proximity to the comprehensive Missouri Botanical Garden, Union Studio provides one-stop shopping for a variety of local art, clothing, jewelry and crafts.”

“There is a wealth of choices in the rich performing arts scene, including the Repertory Theatre of St. Louis, which includes the playwright Tony Kushner as an alumnus. St. Louis Black Repertory bills itself as the nation’s largest professional African-American theater company.”

“The second-oldest symphony in the country, the St. Louis Symphony Orchestra plays in Powell Symphony Hall, an ornate 1935 vaudeville theater. In summer, the 100-year-old Municipal Opera Association, known as the Muny, stages popular musicals (“Guys and Dolls” kicks off the season June 10) in a vast 10,800-seat outdoor stadium in Forest Park.”

“The site of the St. Louis World’s Fair in 1904, the nearly 1,300-acre Forest Park serves as the wilderness and playing field for urban residents, as well as a cultural magnet with attractions that include the Saint Louis Art Museum, Missouri History Museum, Saint Louis Zoo and Saint Louis Science Center.”

The 2019 St. Louis Mini Retreat is subject to the following Belizean Grove cancellation charges if you cancel for any reason: